In the cells where the measure is implemented, we compute the values of the soil quality indicators by multiplying the current value by the response ratio, determined from local conditions as described in the previous chapter. The soil quality indicators of cells where the practice is not implemented remain unchanged, i.e., the response ratio is null. To account for the effect of the randomly chosen cells for implementation, we conduct 100.000 realizations of the raffle, and compute the mean value and standard deviation of the response ratio in every cell.

The results are analysed in agro-climatic regions relevant for policy making. These regions were defined by combining the information on physical factors, such as climate classes, soil types or biomes and socio-economic factors, such as administrative organization. The adopted agro-climatic regions for policy analysis in Europe and China are shown in Figures 14 and 15. 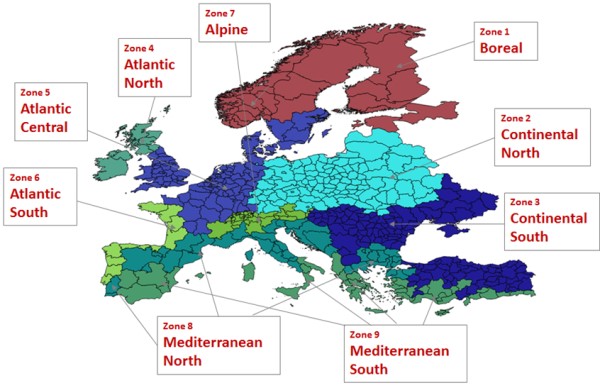 3. Validation of the approach

The upscaling model was validated and co-designed in a workshop reported in »Soil management scenarios. In the workshop, project partners, invited scientists and stakeholders discussed the strengths and weaknesses of the proposed approach and will contribute to improve the model.