Of the stakeholders who evaluated the beta version of SQAPP, 55 were men and 32 were women. Here we report some further analysis of the feedback, using gender disaggregated data, to see where there was similarity and where there were differences between the responses of men and women. Some of the differences were statistically significant, but the explanation for them are still a guess.

1. Numbers and ages of stakeholders

Of the 89 stakeholders who participated in the evaluation of SQAPP, 55 were men, 32 were women and 2 preferred not to identify their gender. Most of the stakeholders were between 30 and 50 years old.

2. Countries and roles of the evaluators

Women and men from 9 different countries took part in the evaluation. The interview protocol included an explicit request to include women. 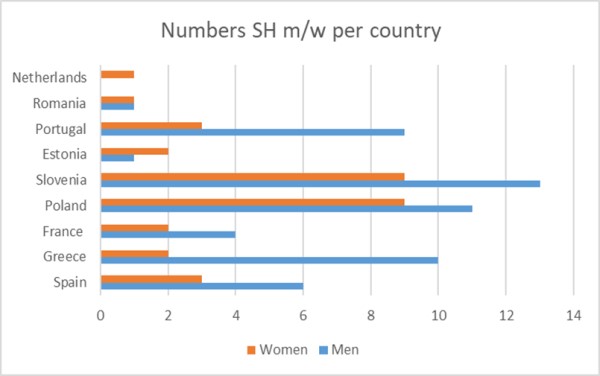 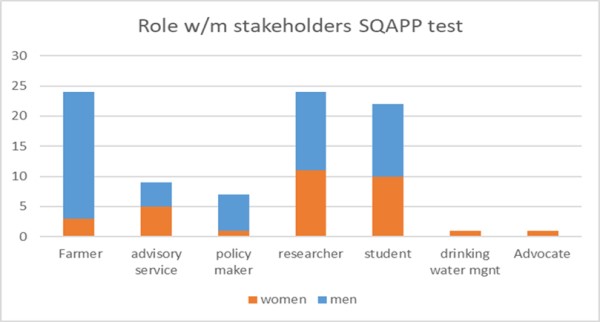 Evaluators in the researchers, student and advisory service groups were well balanced between men and women. Of the 25 farmers, 21 were men, 3 were women. One didn’t mention his or her gender. There was one woman from a drinking water company and one calling herself an ”advocate for inclusive sustainable land governance”.

The final part of the questionnaire enquired about the stakeholders' expectations (if any) of SQAPP. The responses differed slightly between the interest groups:

Almost half of the men farmers (10 of 25), but not the 3 women farmers, said they had expectations of SQAPP.

4. Satisfaction with the soil properties section

Most of the stakeholders rated the soil properties section as "good to satisfactory" (29 men and 18 women said it was “good”, 23 men and 11 women said it was “satisfactory”). There were very few who said it was unsatisfactory (3 men and 3 women). Comments and suggestions for its improvement came from 11 women and 10 men who had different roles. Two women advisors, who found the soil propeties section unsatisfactory, said there was "difficulty of the information for use by farmers". This was also mentioned by several male farmers, two of whom also found the section unsatisfactory. Of those who did find the section satisfactory, several questioned the data; two women wanted to know its source and asked from which databases the data is extracted. One woman advisor also mentioned that "The units of soil nutrients are different than we use in Slovenia". One man farmer asked how the data is being updated and who assesses its reliability. 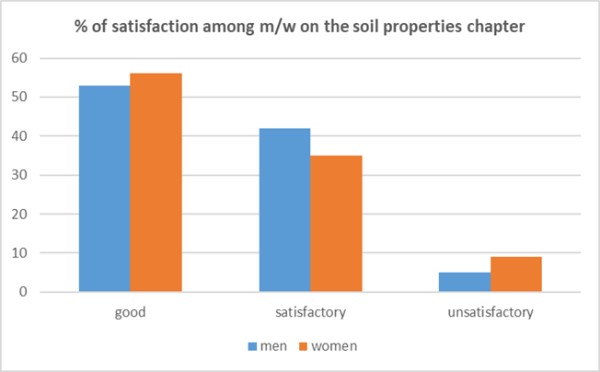 A gender equality significance test was carried out on all the responses. Those two thirds of the questions that used ordinal variables were analysed with a Mann-Whitney-test; the remaining third used numerical values and yes/no answers and were analysed with a t-test. The questions were tested for significant difference between the (average of all) responses from women and men.

The questions relating to the relevance of the various soil threats suggested by SQAPP (erosion by water or wind, compaction, salinization, organic matter decline, nutrient depletion, acidification, contamination or biodiversity decline) in particular showed some differences in the responses between the genders. Women were significantly more positive than men that threats to soil biodiversity and soil acidification were relevant locally. Women responded between “very relevant and relevant” and men responded between “relevant and irrelevant”. It is not clear from the additional remarks made by stakeholders whether biodiversity or acidification had gender specific attention. 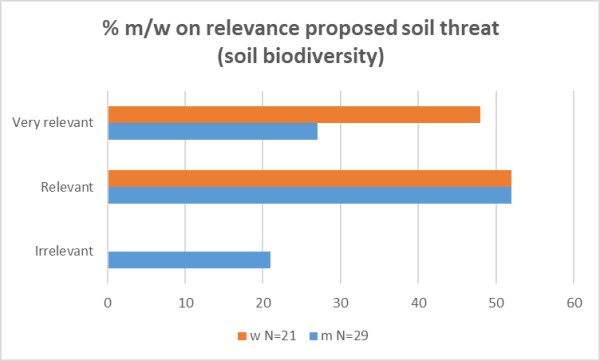 The genders had different responses to most of the other questions, but they were not significantly different.

A few more significant differences between the genders appeared when the responses of researchers were tested as a separate group. Women responded that soil organic matter decline and soil nutrient depletion were "very relevant" to "relevant", and the men said they were "relevant" to "irrelevant".

Regarding the relevance of the other threats (water and wind erosion, compaction, salinization and contamination), women found several of them more relevant than men, but the difference was not significant. 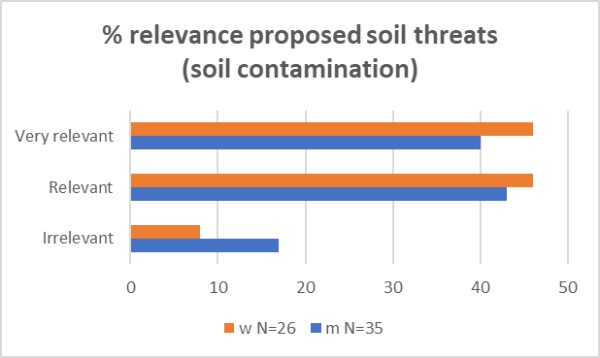 Concluding remarks about the significant differences:

Both women and men were up to 100% positive about the clarity of text in SQAPP that gives the descriptions of recommended practices, and both were mainly positive about the level of detail provided. Women were slightly more positive than men (84% and 75% respectively).

The majority of both men and women said that SQAPP fulfilled their expectations, with women (82%) being slightly more positive than men (71%)

More women had no particular expectations of SQAPP before they evaluated it than those who did. After the evaluation women were more positive than men that it fulfilled their expectations.

Of the three women who did have expectations of SQAPP, but these were not fulfilled (the “yes, no” category), two were from advisory services. They said “the information is too theoretic, ask to give more practical advices which are actually usable for farmers and advisers”. This is consistent with most of the farmers' comments; they ask for more practical information, farm specific data, translation to the local language and more personalisation of the app. The other woman said: “When starting at a plot it is OBLIGATORY to fill out the annual precipitation. And this data is not always at hand, therefore it is guesstimated or even just randomly filled-out. It would be good if SQAPP would use geo-located precipitation databases.” She also says to “Indicate the sources/ databases for the Soil Properties and the Soil Threats”.

In summary the comments are:

Gender disaggregated data is useful for providing insight into and approaches to equality and diversity.

Of the 89 individuals who evaluated the beta version of SQAPP, 55 were men (62%), 32 were women (36%) and 2 preferred not to specify their gender. The diversity is researched in the stakeholder responds to the SQAPP tests.

Apart from their answers to the questions, there is no indication why women would find soil biodiversity and soil acidification more relevant as a proposed soil threat than men. The women do not mention the subjects specifically in their remarks and, although these probability tests for significance are designed to exclude coincidence, that is also still a minor possibility. Although significant differences draw attention to themselves, we are not ready to draw any conclusions from them. They remain in the sphere of nuances that are hard to point out.

Some of the differences might be due to gender related interests and it would be helpful to acknowledge them when iSQAPER widens its scope to the needs of the stakeholders and the solutions that they are looking for. It might also be useful to investigate further any gender-related interests.

The majority of both men and women say that the SQAPP fulfilled their expectations. Percentage-wise women (82%) are a little more positive than men (71%). The stakeholders expected information on soil quality from the SQAPP and this was satisfactorily delivered according to both men and women from the different user groups.