The questionnaire was designed to collect feedback and comments from a wide range of stakeholder groups (farmers, advisory services, policy makers, researchers, and students) of different age, gender, and nationality, in order to take into account a variety of socio-cultural, economic and environmental opinions and conditions.

A total of 90 European stakeholders participated in this survey: 56 male, 32 female and 2 not defined. Their age varied between 21 and 63 years with 34% being younger than 30 (Fig. 1A). The majority of the stakeholders were researchers and farmers, the others being students, advisory services and policy makers (Fig. 1B). The locations in which SQAPP was evaluated were: Slovenia (23), Poland (20), Portugal and Greece (12), Spain (11), and France (6). Fewer locations were evaluated in Estonia (3), Romania (2) and Netherlands (1) (Fig. 1C). 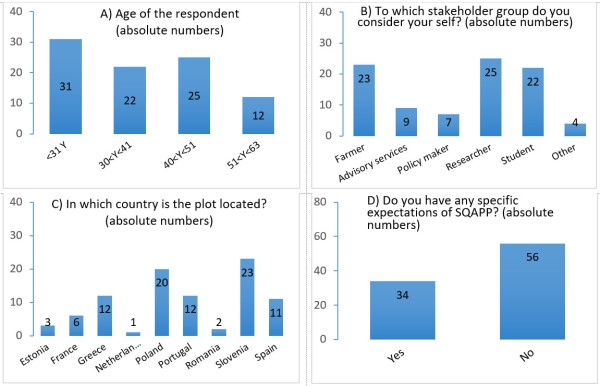 In order to gauge their interest in assessng soil quality, the respondents were first asked if they have any expectations of SQAPP. Figure 1D shows the majority of individuals had none. Of those who did express an expectation, the following were the most frequently mentioned (in decreasing order of priority).

Seventy-three respondents had downloaded SQAPP from Google Play store, 14 from Apple Store, and the remaining 3 had used a link. The majority of the respondents (89 among 90) did not encounter any problem when downloading it.