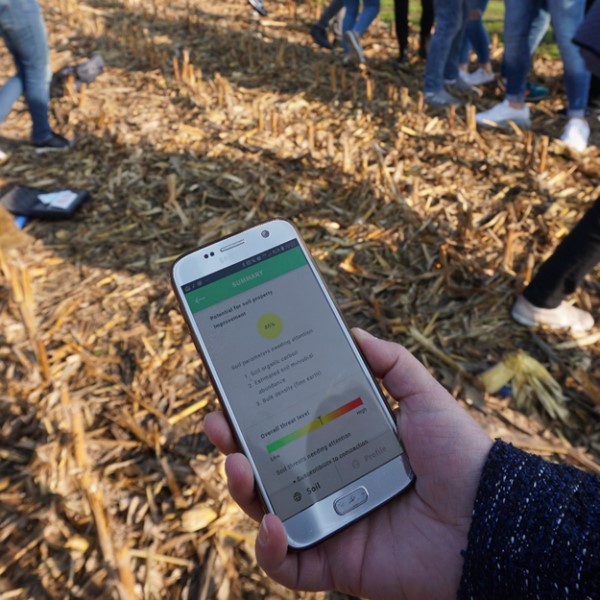 SQAPP has been through a number of rounds of formal evaluation by different groups of users and stakeholders during its development. This feedback has been evaluated and taken into accound in subsequent revisions, as summarised in »Developing SQAPP.

As part of the process of developing SQAPP, the beta version was formally evaluated by some 90 European stakeholders (researchers, farmers, students, advisory services and policy makers) in locations in Slovenia, Poland, Portugal, Greece, Spain, France, Estonia, Romania and Netherlands. The evaluation used a standardized interview protocol and questionnaire to collect feedback from the stakeholders on the quality and accuracy of information provided by SQAPP and the benefits and disadvantages of its different features.
»SQAPP (beta version) - questionnaire

The feedback and comments received on the beta version of the SQAPP showed that the majority of respondents were satisfied with the soil parameters used by SQAPP and local soil threats that it identified. Interestingly there were some siginificant differences in the responses given by men and women as to the level of relevance of several particular soil threats and soil properties in their own locations. The majority of respondents liked the user-friendly format and, overall, it fulfilled the expectations of the majority of stakeholders who see a potential use for it. However some improvements were needed.
»SQAPP (beta version) - feedback results
»SQAPP (beta version) - gender disaggregated feedback results

The iSQAPER and »LANDMARK projects joined together to hold a side event on soil quality and soil functions at the Wageningen Soil Conference in August 2019. The workshop included a demonstration of SQAPP and the collection of feedback from workshop participants.
»Soil Horizons Workshop - feedback results

Peer-review of by iSQAPER partners at plenary meeting (June 2019)

A review session was organized at the 5th iSQAPER Plenary Meeting, Ljubljana, 11 June 2019 with the purpose of reviewing SQAPP and suggesting any final adjustments to be made. The session was born out of a need to conduct a peer-review of SQAPP that included experience partners had obtained using SQAPP themselves and discussing and demonstrating it with others.
»iSQAPER project partners' SQAPP review

In the final phase of iSQAPER, demonstrations events were organised in the all the study sites (with the exception of Zhifanggou Watershed) to demonstrate and discuss the local soil quality assessment and recommended management practices provided by SQAPP (among other things). A total of 483 people participated in 11 events including representatives from all the target groups of stakeholders (farmers, advisors, suppliers, researchers, students, policy makers and administrators). During the events feedback was collected from some 220 of the participants in response to the following questions.