Two working papers document the testing of SQAPP by comparing measured and SQAPP-derived soil quality and soil threat parameters carried out. In a report on SQAPP Assessment as a tool to monitor soil quality improvement »Part 1. Correlation results and discussion Teixeira and Basch (2019) discuss the correlation and the agreement between measured physical, chemical and biological soil properties, and the values estimated by the Soil Quality App (SQAPP) for the same location. In »Part 2. Soil threats, Soil Quality Index and recommendations for SQAPP they discuss the accuracy of soil properties and soil threats classification based on soil properties estimates of the Soil Quality App (SQAPP) and the correlation and agreement with the soil properties and soil threats classification using measured physical, chemical and biological soil properties, for the same location. The final goal of these studies was to assess if SQAPP can be used to monitor soil quality improvement, and the adequacy of the recommendation system. 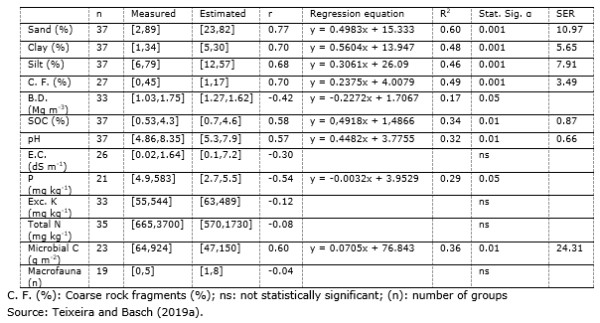 Based on these studies, the following qualifications were given to the soil quality and soil threat indicators in SQAPP (Table 6). Of all indicators, 9 are judged to have low accuracy, 8 moderate accuracy, and 2 high accuracy, whereas no verification was made for 7 indicators (mostly soil threats).