The SQAPP has been through a number of rounds of evaluation by different groups of users stakeholders during its development. These include: a field evaluation of SQAPP performance; a formal evaluation of the beta version by some 90 European stakeholders (researchers, farmers, students, advisory services and policy makers) in locations in Slovenia, Poland, Portugal, Greece, Spain, France, Estonia, Romania and Netherlands; an evaluation by some 220 participants in the 11 study site Demonstration Events. The feedback from each evaluation was assesed and used in the further development of the app (see »User feedback and SQAPP development). Here we provide details about how issues raised during the user evaluations were addressed in the SQAPP development.

Review of SQAPP performance has focused on three dimensions: accuracy and relevance of the information provided, as well as its functionality as a tool in the hands of end-users. These dimensions were defined as follows (van den Berg et al., 2018):

Accuracy as a concept can be defined as the difference between the estimated value and the true value. In order to determine accuracy, quantitative measurements of data are necessary. This is expressed by knowing or estimating the actual (true) value (Walther and Moore, 2005). As such, the accuracy in this case can refer to the ability of the app to report information to the best estimation of the true value. Reference values were taken from laboratory analysis of soil samples, or from field measurement or visual soil assessment.

The relevance of the information provided by the app can be analysed using the concept of actionable knowledge as stated by Cash et al. (2003): “Science and technology must play a role in sustainable development whilst effectively managing the boundaries between knowledge and action in ways that simultaneously enhance salience, credibility and legitimacy of the information produced”. Actionable Knowledge as a concept defines the boundaries of stakeholder participation in the decision making process and fostering solutions together (Geertsema et al., 2018).

The concept of actionable knowledge was channeled into the investigation of relevance. Relevance, in the context of this evaluation process, is used to describe the meaningfulness of the information provided by the app and subsequent action through adjustments in management practices by the end-users. This was tested via discussion of the recommendations with app users during interviews. We also assessed the recommendations provided based on various levels of suitability to the specific farmers’ context.

Functionality can be defined as the effectiveness of the app as a medium, the accessibility of the language used, and the usability of the tool. Within the concept of usability, Iwarsson and Ståhl (2003) suggest four components that need to be satisfied: a personal component related to human functioning, an environmental component related to barriers within the environment that may inhibit action, an activity component related to the activities that need to be performed, and, finally, an analysis of the three aforementioned parts ensuring individual and group preferences are met within the targeted environment. That means, that the functionality of the app is not only limited by the design of the interface, but it also encompasses the socio-environmental context in which the user is placed, as well as the individual attitude towards the technology.

Accuracy assessment was an essential part of the SQAPP evaluation process as it was raised as an important issue by stakeholders. It was in several of the rounds of evaluation integrally included in the assessment with app users, but as it relied on testing against other data, this part is reported in »SQAPP testing. The evaluation with researchers in the project plenary meeting in Ljubljana and conference participants in the Soil Horizons workshop was labelled as peer review and is reported in »SQAPP peer review.

2. Student evaluation of the beta version with farmers in the Valencia region, Spain

This evaluation sought to understand the accuracy and relevance of the app through assessing how soil properties, threats, and suitable management practices are uniquely interpreted and reported by the application, by field measurements and observations, and by farmers and landowners themselves (Figure 1). 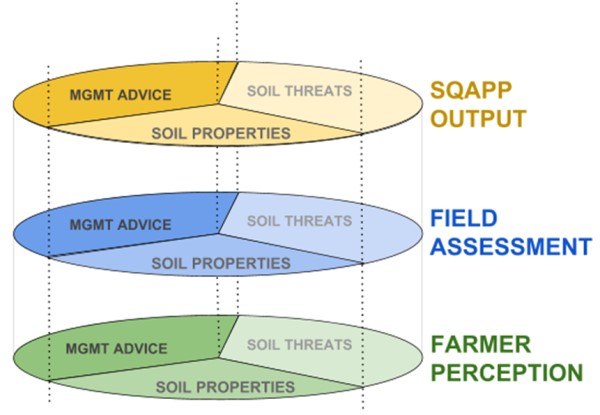 For the full report see »Field evaluation of SQAPP performance (beta version) in the greater Albaida region. The main recommendations stemming from this report are shown below with an indication on how this was included in SQAPP (Table 1).

Table 1: Core recommendations for the improvement of SQAPP: the soil quality app

As part of the process of developing SQAPP, the beta version was formally evaluated by some 90 European stakeholders (researchers, farmers, students, advisory services and policy makers) in locations in Slovenia, Poland, Portugal, Greece, Spain, France, Estonia, Romania and Netherlands. The evaluation used a standardized interview protocol and questionnaire to collect feedback from the stakeholders on the quality and accuracy of information provided by SQAPP and the benefits and disadvantages of its different features. The results of this evaluation are reported in »SQAPP (beta version) - questionnaire, »SQAPP (beta version) - feedback results and »SQAPP (beta version) - gender disaggregated feedback results. Key issues identified and how they were considered in SQAPP development are listed below in Table 2.

Table 2. Key issues emerging from the formal SQAPP beta-version and how they were addressed in SQAPP development.

In the final phase of iSQAPER, demonstrations events were organised in all the study sites (with the exception of Zhifanggou Watershed) to demonstrate and discuss the local soil quality assessment and recommended management practices provided by SQAPP (among other things). See »»Demonstration events - feedback results.

A total of 483 people participated in 11 events including representatives from all the target groups of stakeholders (farmers, advisors, suppliers, researchers, students, policy makers and administrators). During the events feedback was collected from some 220 of the participants in response to the following questions.

What aspect of the SQAPP app interests you most?

The three most frequent response types from the Europeans were:

The three most frequent response types from the Chinese were:

Are there any improvements or changes you think should be made to SQAPP to make it a tool that you would use regularly?

The two other most frequently requested improvements from the Chinese were:

Regarding the suggested improvements, we have worked on the translations of app commands, AMP recommendations and additional information in 14 languages. We have prepared guidelines for different types of users, in which farm advisors could play a role in supporting farmers and land users to operate SQAPP effectively, and we have expanded the portfolio of AMPs and specific examples to provide to app users. The Google Play store is not accessible in China – an apk installer file has been shared. Accuracy issues have been highlighted by adding a qualification for the reliability of each data layer for which we could perform tests in iSQAPER sites.