Ranges for soil quality indicators were constructed for each indicator and pedo-climatic zone. Figure 16 gives some examples of cumulative probability density functions as displayed in SQAPP. The minimum and maximum values are calculated separately for each pedo-climatic zone and land use/land cover class (arable land and grazing land). The visualization of probability density functions is done in plots where on the x-axis is the score of the soil parameter, and on the y-axis the cumulative frequency (0-100%). Minimum and maximum scores, which in the pilot app were always indicated by red (undesired value) and green (desired value) markers, were later replaced by grey markers if either minimum or maximum values (or both) could not be interpreted as desired value (e.g. maximum soil organic carbon (SOC) value was indicated with a grey instead of green marker, as very high SOC content cannot be taken as indicator of superior soil quality. 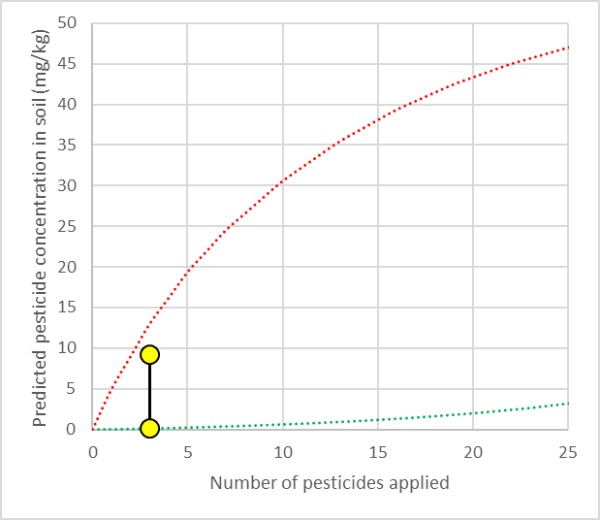 The calculations required for the construction of cumulative probability density functions were very computationally intensive. The data to construct each curve are sent from the ISRIC REST to the app using 255 values along the curve.

For PECs a different approach was taken. Based on ordering the PECs associated with active substances from high to low and from low to high, the worst-case and best-case scenario for a given number of pesticides applied can be given (Figure 17, indicated by the red and green dotted lines, respectively). When the user knows the number of fungicides, herbicides and insecticides applied, summing the orderings of each type gives a narrower range of possible PEC values, indicated by the yellow markers in Figure 17. If the user would know the exact active substances applied, the range can be further reduced and a specific value is given (in SQAPP indicated by a cyan marker).