The soil property and soil threat indicators considered for the app are based on respective reviews of indicators in »Soil quality - a critical review and »Indicator performance. Bünemann et al. (2018) reviewed the most common soil properties in minimum datasets, showing a dominance of physical and particular chemical soil properties, and a underrepresentation of biological soil properties. This dominance remained when considering available spatial datasets (Figure 13). Two datasets that were not included as frequently used indicators in the overview of Bünemann et al (2018) were added: coarse fragments (physical property) and number of macrofauna groups (biological property). 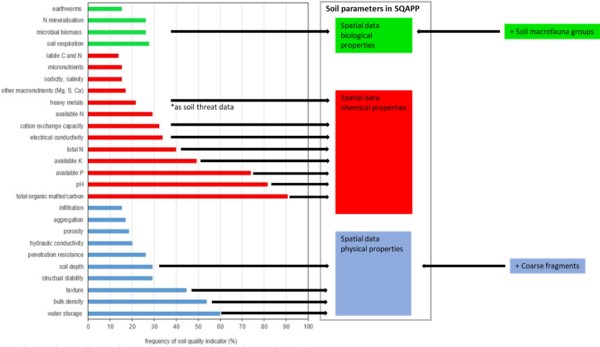 »Calculating the soil quality index in SQAPP provides the list of soil threats for availability of spatial datasets (in Europe as a minimum) and was taken as a starting point. Later on, some of the datasets were replaced with newer/better datasets (e.g. Copper in European topsoils), but the indicators remained the same. An exception to this is the soil threat of pesticide contamination. No maps of pesticide pollution are available, but a procedure was designed by which users can, based on their use of fungicides, herbicides and insecticides, get an estimate for the pesticide environmental concentration (PEC) of their soils at the moment of application and after 100 days.

Although PECs are publicly available, up to now they were never compiled into a database and explored as such. This is specially surprising since the presence of mixtures of pesticide residues in soils is the rule rather than the exception. The steps followed to set up the pesticide module included i) to identify the active substances allowed in different crop-EU region units; and (ii) to compile representative uses and PECs of currently approved active substances into a single database. Of the active substances allowed on the EU market under the EC Regulation 1107/2009 concerning the placing of Plant Protection Products on the EU market (EC, 2009; EC, 2019), there were 230 synthetic pesticides applied as fungicide/herbicide/insecticide for which soil degradation data was available. The physical-chemical properties of these 230 active substances, environmental fate data, and (eco-)toxicological data were extracted from the Pesticide Properties DataBase - PPDB (PPDB, 2019).