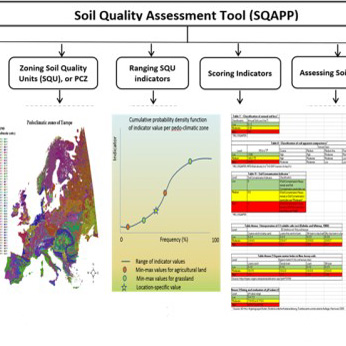 SQAPP was designed with the idea that it should provide the user with the opportunity to access fragmented data on soil quality and soil threats in an easy-to-use way. Moreover, the user should not only receive indicator values, but be guided in interpreting these values by providing more contextual information: is a certain indicator value high or low in a given context? Such contextual information is provided through analysing indicators within combinations of climate zones and soil types, and by distinguishing between arable land and grazing land. Finally, the user should receive, based on an assessment of the most critical issues, management recommendations on how soil quality can be improved and soil threats be overcome.

A second consideration in designing SQAPP was the idea to use soil quality and soil threat indicators for which spatial data exist. This way, it is possible to provide the user with data for any indicator for which data exist for a given location, in combination with the comparative contextual information. The comparative aspect of the soil indicator data is then realized by calculating cumulative probability density functions for each pedo-climatic zone. All indicator values are given as ‘best guestimate’ for the location. The user can proceed with generating management recommendations based on these standard values, or replace some or all indicator values with own data to get more accurate recommendations. This design helps to make the SQAPP directly helpful by visualizing available soil information in a systematic and easy-to-access way.

Fourthly, although the iSQAPER project focuses on Europe and China, it quickly became clear that the amount of work required to develop SQAPP would be more appropriately justified by building an app with global coverage. This inclination to go global was reinforced by some hurdles experienced along the way to harmonise European and Chinese data (see below). As a consequence, the app was designed with global functionality in mind. The overall procedure to develop SQAPP is given in Figure 12. 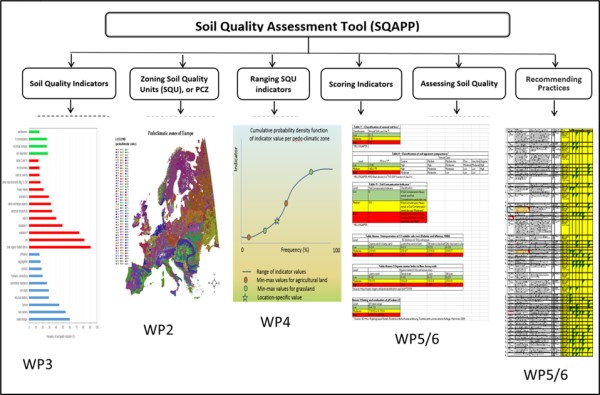 Practical considerations: The pilot app was developed for mobile phones/notepads operating under either Apple iOS or Android. These two platforms together cover >97% of smartphones. For geolocation, Bing maps was used as Google products are banned from use in China.