Any substance or mixture of substances intended for preventing, destroying, repelling, or mitigating any pest or weed is a pesticide. Pesticides can be classified according to their target, their mode or period of action, or their chemistry (Arias-Estévez et al., 2008). More than 500 different pesticide formulations are being used in our environment, mostly in agriculture (Azevedo, 1998), although the control of biological public health hazards also continues to be an important field of application. In the last 50 years, the use of pesticides has greatly increased the quantity and improved the quality of food for the growing world population. However, with increasing amounts used, concern about their adverse effects on nontarget organisms, including human beings, has also grown.

In fact, it has been estimated that less than 0.1% of the pesticide applied to crops actually reaches the target pest; the rest enters the environment gratuitously, contaminating soil, water and air, where it can poison or otherwise adversely affect nontarget organisms (Pimentel and Levitan, 1986). Furthermore, many pesticides can persist for long periods in an ecosystem—organochlorine insecticides, for instance, were still detectable in surface waters 20 years after their use had been banned (Larson et al., 1997).

Pesticides, the most cost-effective means of pest and weed control, allow the maintenance of current yields and so contribute to economic viability. Concern about the environmental impact of repeated pesticide use has prompted research into the environmental fate of these agents, which can emigrate from treated fields to air, other land and waterbodies. How long the pesticide remains in the soil depends on how strongly it is bound by soil components and how readily it is degraded. It also depends on the environmental conditions at the time of application, e.g., soil water content. Pesticide use must ensure public safety and environmental protection with regards to both the chemical itself and their potentially harmful metabolites.

The potential presence of pesticides in the environment as a result of each production activity is estimated following the approach of Wijnands (1997). Environmental exposure to pesticides (EEP) for soil, air and groundwater are calculated based on the amount of the active ingredients (AI), their vapour pressure at 20–25 °C (VP), 50% degradation time (half-life) and mobility (Kom) (Neeteson et al., 2001). The EEPsoil per kg of commercial product consisting of various active ingredients is calculated as follows:

Here we use an index to account for the Pesticide Soil Contamination Index (PSCI) that is a combination of two sub-indicators:

The indicator PPMsoil is obtained by combining two other indicators:

Soil half-life (days), sorption coefficient (Koc), GUS and classification of PPM for different pesticides are given in the following spreadsheet:

The Figure 22 and 23 show the approach for the assessment of the Pesticide Soil Contamination Index (PSCI). 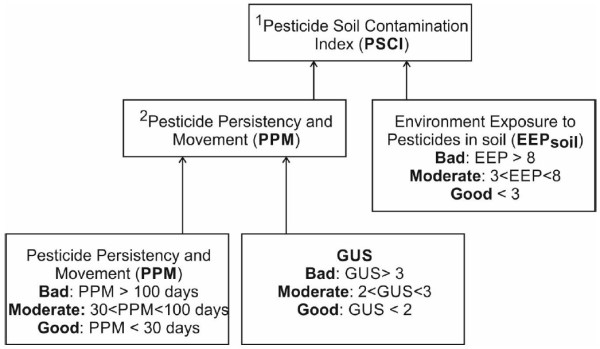 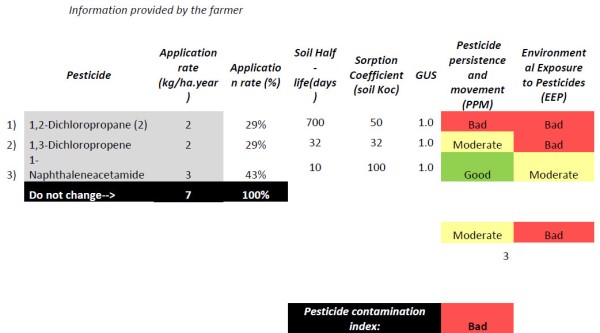 Each indicator is ranked as “Bad”, “Moderate”, and “Good”. We adopt a conservative approach to classify the PSCI when mixing EEP and PPM meaning that the index is scored as “Good” only if both EEP and PPM have individually “Good” classification. When 2 or more pesticides are used together in same field, we adopt additional approach to account for the final classification of each indicator (assuming x = Bad, y = Moderate, and z = Good):

In the case of 1 pesticide (row 1) in Figure 23), the score PSCI resulting from PPM and EEP is calculated as follows:

In the case of 2 pesticides (row 2) in Figure 23), similar principle as above will be adopted for each step.

In the case of 3 pesticides used together in same field, we adopt the following principle: