Soil fauna includes those animals that pass one or more active stages in soil or litter; some may be temporary occupants of this habitat, most are permanent. Soil animals participate in the genesis of the habitat in which they live. They are found in all soil types and only the species composition, diversity, quantity and function of soil animals varies with changing soil types. The main groups represented remain the same.

Soil sample should be sampled between 0 and 20 cm depth and about 1 kg of soil should be taken for the analysis. A Tullgren funnel is an ordinary funnel into which a handful of soil or leaf litter (often soil sample is supported by a layer of mesh) is placed. The funnel is placed above a jam jar or other collecting vessel with slippery sides and with a piece of slightly moist tissue paper placed at the bottom of the jar. A light is then positioned so that it shines on the substrate within the funnel. Over a period of a few hours the insects, mites and other invertebrates present gradually work their way down, moving away from the source of light and heat, and fall into the jar where they can be examined. Maximum extraction of soil micro fauna can be recorded after a duration of 16 to 22 hours of continuous heating at temperature ranges between 35.1°C to 35.2°C (Bano and Roy, 2016).

Rough estimates of soil biodiversity indicate several thousand invertebrate species per site, as well as the relatively unknown levels of microbial and protozoan diversity. Soil ecosystems generally contain a large variety of animals, such as nematodes, microarthropods such as mites and Collembola, Symphyla, Chilopoda, Pauropoda, enchytraeids and earthworms. In addition, a large number of meso- and macrofauna species (mainly arthropods such as beetles, spiders, diplopods, chilopods and pseudoscorpion, as well as snails) live in the uppermost soil layers, the soil surface and the litter layer.

In general, soil invertebrates are classified according to their size in microfauna, mesofauna, macrofauna and megafauna (Wallwork, 1970; Menta, 2012).

We recommend recording number of organisms and their classification according to their size. 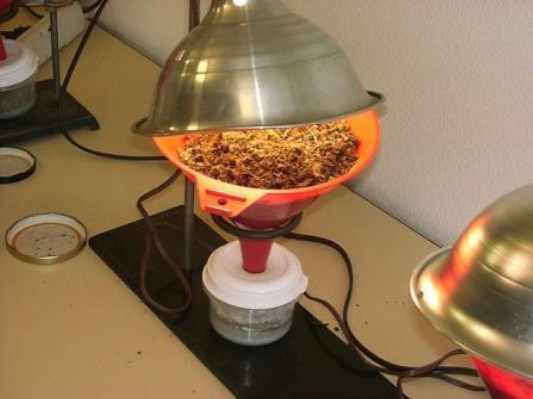 Assessment can be done using a home-made apparatus, or using Tullgren funnel purchased in a firm via internet.