Our review has revealed how soil quality assessment has changed through time (Figure 5) in terms of objectives, tools and methods, and overall approach. A number of steps are to be taken in soil quality assessment (Figure 6), elements of which are addressed to very different degrees in the large number of approaches that have been developed during the past three decades and reviewed in this article. An elementary start is a clear definition of the objectives, i.e. whether soil assessment is meant as a basis for management recommendations, seen as an educational tool, or as part of a monitoring program. Likewise, target users should be named and involved from the beginning in order to increase adoption of the developed assessment approach. Such approach has been taken in the Horizon 2020 project »LANDMARK, where the assessment of soil functions and indicators has in the first place been derived through stakeholder workshops. The application of stakeholder- based assessment requires different tools for different knowledge. For example, visual soil assessment tools are targeted at farmers for understanding the status of soil structure in the field, whereas more detailed knowledge on productivity requires laboratory measurements, which are, e.g., offered to farmers in the Cornell soil health assessment (Moebius-Clune et al., 2016) and by recently developed commercial soil testing services based on spectroscopic methods (»Novel soil quality indicators). 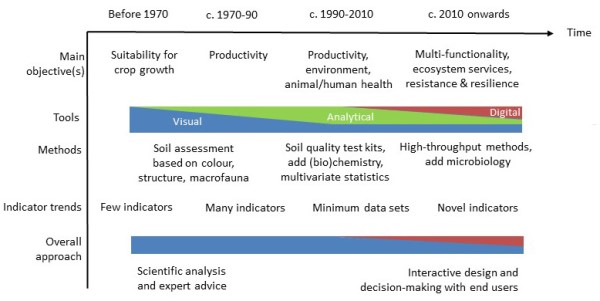 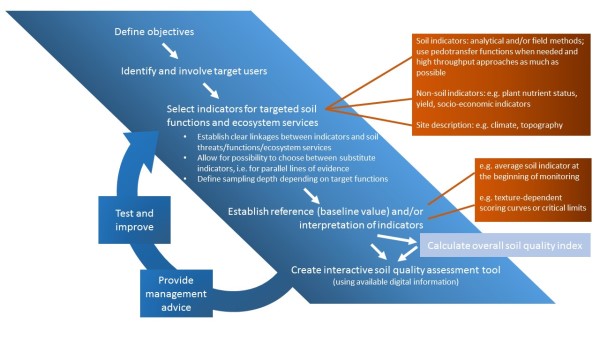 The possibility to choose between substitute or proxy indicators (Figure 6) would be highly beneficial but is so far rarely offered. The use of parallel independent lines of evidence in ecological risk assessment (Rutgers and Jensen, 2011) and the inclusion of both qualitative and quantitative information in classical land evaluation (Sonneveld et al., 2010) could be models for that. Besides soil indicators, whether obtained using field assessments, analytical methods, high-throughput approaches or pedotransfer functions, also non-soil factors such as climatic and site conditions and non-soil indicators such as plant performance and aboveground biodiversity, landscape and socio-economic indicators (e.g. Culman et al., 2010; Jackson et al., 2012) should be considered.

The interpretation of the values of the proposed soil quality indicators needs to be well-defined. If no system for interpretation is provided, the indicators cannot be used in practice. For many soil properties, texture-dependent scoring curves need to be developed, which is possibly one of the greatest challenges. The increased availability of digital soil maps and soil survey data such as the »LUCAS soil data available from the Joint Research Centre or »Global SoilGrids in 250M provides an opportunity to establish such scoring curves or target values more easily from frequency distributions of a given soil property. However, if soils in a region are badly managed or were so in the past, such a frequency distribution may not include the optimum state. In this case, the principle of identifying reference sites with acknowledged good soil quality (Rutgers et al., 2008; Rutgers et al., 2012) would be more suitable, or could be combined with the scoring curve approach. Reference or threshold values are required both to use soil quality indicators to their full potential and to translate the interpretation into appropriate management and policy advice. The assessment of the (dis)agreement of results obtained from different lines of evidence (e.g. sets of indicators based on physical, chemical or biological parameters; see e.g. Velasquez et al., 2007) can be adopted from mathematical procedures developed in ecological risk assessment (Karlen et al., 2001; Rutgers and Jensen, 2011).

An overall soil quality index is often desired but actually not very meaningful, since soil quality is best assessed in relation to specific soil functions. Rather than calculating an overall index, a graphical representation of how well a given soil fulfils its various functions is much more effective in communicating with stakeholders, target users and the general public. In practice, different sets of soil quality indicators will be used with different weightings, depending on the set of soil threats and ecosystem services at stake according to the “stake-holders”.

Science plays an important part in the search, under prevailing pedo-climatic conditions, for indicators of the structural and process aspects of soil functioning that mediate the delivery of soil-based ecosystem services deemed important by actors and other stakeholders who exert(ed) pressures on the soil through land use and soil threats. The key terms here are ‘actors’ and ‘stakeholders’. Terms such as ‘soil function’, ‘ecosystem service’ and, indeed, ‘soil quality’, are boundary concepts, i.e. concepts that enable researchers from different disciplines, policy-makers, and other stakeholders to develop a common language and integrate and derive knowledge relevant to their field (Schleyer et al., 2017). Beyond scientists, those who have an immediate stake in soil quality are land managers, i.e. farmers, managers of nature conservation areas, roadsides, banks of waterways and urban green areas, and the public at large. As soil quality management is also about societal negotiation in the face of unavoidable trade-offs between various soil uses, the very development of soil quality indicator schemes will benefit from the involvement of actors and other stakeholders with a view to implement adaptive land use and management (Barrios et al., 2012; Barrios et al., 2006).

Although, clearly, soil quality is not merely a natural science topic, in most of the reviewed assessment schemes farmers/land managers did not play a leading role. We suggest that intimate involvement of end users is a major point of attention, but it may still not lead to full implementation of the results. For example, in the Illinois Soil Quality Initiative, where farmers were involved in the development of soil quality assessment schemes, they were constrained in the necessary implementation of the results by socio-economic factors (Wander et al., 2002). Clearly, other actors play an important part. Industries that ultimately also depend on the soil, will be(come) important actors, too, such as food, fibre and fuel industries, and electricity production, manufacturing and fashion industries (Davies, 2017). Their interest is in sustained resource supply, which is at stake because of ongoing loss of soil functionality and increased variability in harvests and water supply associated with global climate change, partly induced by unsustainable land use and management. Land managers, industries and, indeed, investors and insurance companies and the public sector at large are increasingly aware of the associated monetary and societal costs and, vice versa, they understand the urgency of adaptive land management and re-design in the framework of food systems (Foresight, 2011) and a fossil-free and circular economy (Rockström et al., 2016).

To be part of such urgent transitions, soil scientists are challenged to engage as ‘honest brokers’ of knowledge who increase the decision space of actors (Pielke, 2007). This engagement of soil (quality) researchers should take into account the following points:

The engagement we make a plea for may require painstaking efforts, from gradual but consistent improvements within existing legislative frameworks (e.g. Ockleford et al., 2017; Römbke et al., 2016) to developing fundamental alternatives to current land use practices (e.g. Montgomery, 2017; Rhodes, 2017). Such engagement will at the same time require unquestionable scientific independence in the co-creation of knowledge (Mauser et al., 2013). We suggest that such engagement is necessary for the improvement of existing schemes and the development of novel schemes for assessment and monitoring of soil quality, as well as for the evaluation of their use and usefulness for all actors involved.