Soil quality is one of the three components of environmental quality, besides water and air quality (Andrews et al., 2002). Water and air quality are defined mainly by their degree of pollution that impacts directly on human and animal consumption and health, or on natural ecosystems (Carter et al., 1997; Davidson, 2000). In contrast, soil quality is not limited to the degree of soil pollution, but is commonly defined much more broadly as “the capacity of a soil to function within ecosystem and land-use boundaries to sustain biological productivity, maintain environmental quality, and promote plant and animal health” (Doran and Parkin, 1994; Doran and Parkin, 1996). As Doran & Parkin (1994) state explicitly, animal health includes human health.

This definition reflects the complexity and site-specificity of the belowground part of terrestrial ecosystems as well as the many linkages between soil functions and soil-based ecosystem services. Indeed, soil quality is more complex than the quality of air and water, not only because soil constitutes solid, liquid and gaseous phases, but also because soils can be used for a larger variety of purposes (Nortcliff, 2002). This multi-functionality of soils is also addressed when soil quality is defined from an environmental perspective as “the capacity of the soil to promote the growth of plants, protect watersheds by regulating the infiltration and partitioning of precipitation, and prevent water and air pollution by buffering potential pollutants such as agricultural chemicals, organic wastes, and industrial chemicals” (National Research Council, 1993, as cited in Sims et al. (1997)). Soil quality can be assessed both for agro-ecosystems where the main, though not exclusive ecosystem service is productivity, and for natural ecosystems where major aims are maintenance of environmental quality and biodiversity conservation. However, the “non-ecological functions” of soil sensu Blum (2005), such as the physical basis of human activities, source of raw materials, and geogenic and cultural heritage, are beyond the scope of this review. 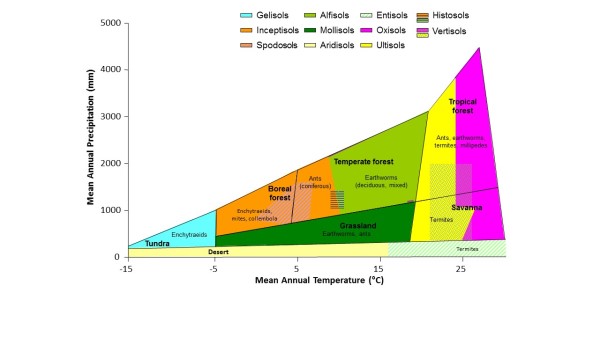 Extrinsic factors such as parent material, climate, topography and hydrology may influence potential values of soil properties to such a degree (Figure 1) that it is impossible to establish universal target values, at least not in absolute terms. Soil quality assessment thus needs to include baseline or reference values in order to enable identification of management effects. Soils often react slowly to changes in land use and management, and for that reason it can be more difficult to detect changes in soil quality before non-reversible damage has occurred than for the quality of water and air (Nortcliff, 2002). Therefore, an important component of soil quality assessment is the identification of a set of sensitive soil attributes that reflect the capacity of a soil to function and can be used as indicators of soil quality. Because management usually has only limited short-term effects on inherent properties such as texture and mineralogy, other indicators, including biological ones, are needed. The distinction between inherent (static) and manageable (dynamic) attributes, however, is not absolute and also context-dependent (Schwilch et al., 2016). For example, stoniness as an inherent property is nevertheless manageable, e.g. by removal of stones from an area to facilitate tillage and to build separating walls between fields, or by addition of gravel and stones to improve friability, to accelerate soil warming in spring or decrease evaporation. Soil management by humans has even given rise to separate classes in the soil taxonomic system, such as Plaggic anthrosols, the plaggen soils of northwestern Europe (e.g., Blume and Leinweber (2004)), and Terric anthrosols, the Amazonian Dark Earths, also known as Terra Preta de Índio (Glaser and Birk, 2012).

The history of the concept of soil quality shows that it is rooted in two different approaches that either put more emphasis on the inherent soil properties or on the effects of human management. The oldest mention in the scientific literature is by Mausel (1971) who defined soil quality as “the ability of soils to yield corn, soybeans and wheat under conditions of high-level management. The choice of these crops to reflect soil quality in Illinois is due to their overwhelming agricultural economic dominance.” This definition emphasises agricultural production and is linked to land evaluation (see below). A similar description was provided by SSSA (1987; cited in Doran & Parkin, 1994) as the “inherent attributes of soils that are inferred from soil characteristics or indirect observations”. This definition is comparable to the more recent term soil capability, defined as the intrinsic capacity of a soil to contribute to ecosystem services, including biomass production (Bouma et al., 2017). The emphasis on inherent, more static soil properties was closely connected to soil taxonomy. It also took management for granted (“under conditions of high-level management”), without specifying those conditions. Larson & Pierce (1991) expressed uneasiness with the focus on agricultural productivity and proposed to disconnect soil quality from productivity. Doran & Parkin (1994) observed that definitions of soil quality included the capacity of soils to function sustainably, but likewise considered the focus on production to be too restrictive. They wanted a definition of soil quality to stress the main issues of concern regarding soil use. Besides productivity, they therefore included the ability of soils to contribute to environmental quality and to promote plant, animal and human health in their definition as cited above.

The concept of soil quality by Doran and Parkin (1994) was heavily criticized in a series of papers (Letey et al., 2003; Sojka and Upchurch, 1999; Sojka et al., 2003). That criticism contained various elements. First, these authors claimed that the concept of soil quality could transform soil science from a value-neutral science into a value system and even referred to soil quality as promoting ideas of a politically correct soil. Second, they expressed discontent with the idea of a universal soil quality index, to which they referred as institutionalizing soil quality. Third, they criticized the concept because of its bias towards certain soil types as a consequence of the focus on intrinsic properties. And finally, they criticized the definition because in its original form it puts too much emphasis and value on a limited number of annual crops that provide cheap food and that are heavily subsidized. Their proposal to replace the term soil quality management by the term quality soil management did not find support, but their criticisms did influence the further development of an operational concept of soil quality, in which management has become the central issue.

Agricultural productivity does not hold a privileged position any longer, trade-offs are explicitly recognized at the expense of a universally applicable index, and the role of soil scientists in relation to societal stakeholders who manage soils (farmers, owners of land for nature conservation, policy makers, etc.) has changed.

A particular recommendation of Sojka and co-authors was to speak of soil use rather than soil functions, so that the responsibility to maintain the quality of the soil can be clearly assigned to the user of the soil. Soil quality assessment then provides the scientific tools for evaluation of the management of soil resources, considering also the societal demands of the various benefits that soils, if managed well, can provide to humankind. The valuation of soil quality hence becomes connected to the valuation of the ecosystem services provided by soils. A further benefit of such a soil quality concept is that it raises awareness and enhances communication between stakeholders regarding the importance of soil resources (Karlen et al., 2001). Recently, there has been renewed interest in this educational aspect, either by focusing more on visual soil assessment (Ball et al., 2013) or by proposing interactive soil quality assessment tools, such as LandPKS (»www.landpotential.org) and »SQAPP the soil quality assessment app currently being developed in iSQAPER.