1. Infografike in videi/Infographics and videos

A series of short videos and infographics were made by the Ljubljansko polje study site team to describe the way in which a number of locally used management practices benefit soil quality. Several of the videos were made by students and contain interviews with stakeholder farmers experienced with using the practices.

The iSQAPER study site in Slovenia is located on the Ljubljansko polje (Figure 8), the twenty-kilometre long and six-kilometre wide plain in the central part of Slovenia on the fertile plains of Sava river basin (300 m altitude, 14º31' E, 46°3' N) which has a moderate continental and sub-alpine humid climate (mean air temperature 10 °C, annual precipitation 1400 mm). Most of the highly fertile arable land in Slovenia is located in plains above shallow groundwater recharge zones, which are the country’s most important sources of drinking water (Zupanc et al., 2011). The mean annual water balance is positive (600 mm), and with the highly permeable soils and subsoils, there is a high risk of N leaching and ground water pollution, leading to a confrontation of drinking water resource protection and agricultural production interests. 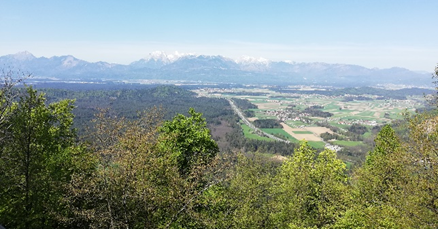 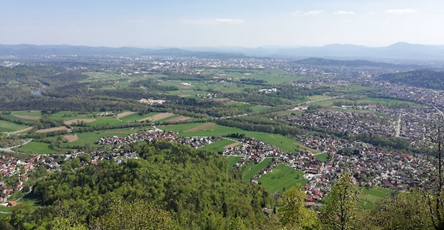 More than 60% of Slovenia is covered by forests and 25% (480,000 ha) is used for agriculture (permanent meadows, pastures: 281,000 ha, arable land: 172,000 ha). The field crops are grown most intensively in the valleys, where a predominately flat surface enables the use of modern farm machinery. The gravel plains of Ljubljansko polje are traditionally agricultural, although the city of Ljubljana has been expanding substantially. According to CORINE land cover data, arable land covers 20.6%, meadows 14.7% and pastures 1.2%. Small family farms are typical for the central-west part of Slovenia. The average farm has 10 ha of land. Farms are mixed and produce includes cash crops (wheat, barley, potato, canola, maize, field vegetables) as well as fodder crops for animals, including second crops in the same year established after the harvest of winter cereals (fodder kale, oil radish, fodder rape, grass-clover mixtures). The cattle farming is quite intensive and consequently silage maize is grown in 40% of fields in a crop rotation. 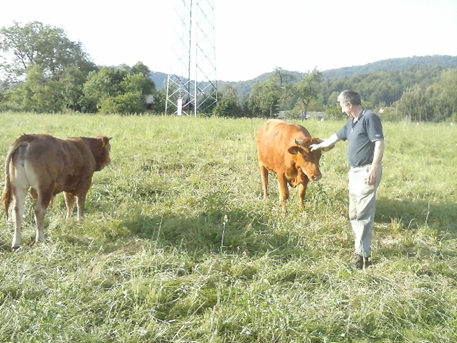 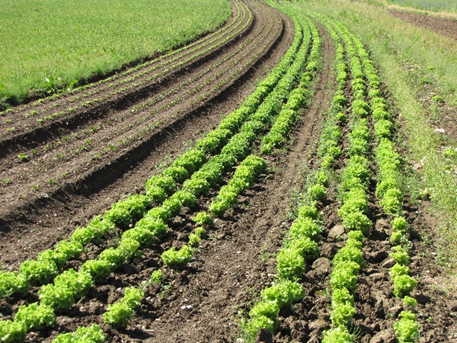 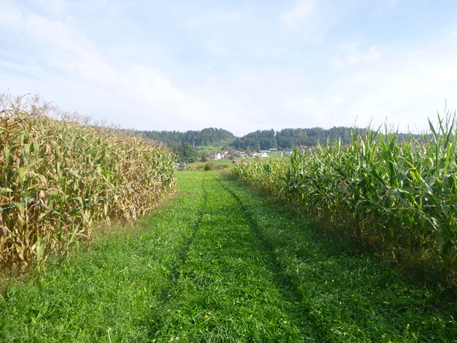 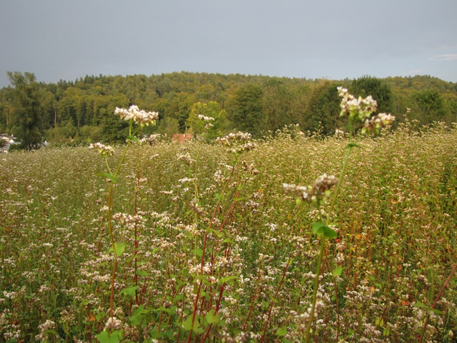 Almost 80% of the soils of these flat areas were formed on fluvio-glacial deposits of sand and gravel, and these soils represent >50% of all tilled fields. In the west of Slovenia, in the river basin of Sava, the parent material is rich in bases, so the soil complexes are also saturated with them. The older, deeper, weathered brown soils are formed above conglomerate or breccia. This type of soil is acid, mostly covered with pine or mixed forests. Predominant soils are gleyic Fluvisols and endogleyic Fluvisols with heterogeneous soil texture, mainly loam and sandy loam, with gravel appearing either on the surface or below the ploughing layer. Some alluvial soil in the study area is classified as silty clay to silty clay loam with a moderately-gleyed layer between 30 cm and 70 cm below the surface of the soil and gravel material underneath. The soil is locally artificially drained by sub-surface drains. 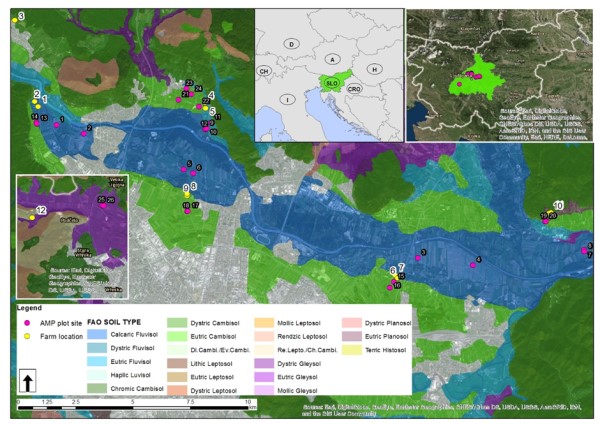 High soil quality provides a buffer zone for the retention of possible pollutants, enabling better nutrient and water use efficiency. A suitable soil management system is essential for the preservation of soil and water resources.

The soil assessment campaign was repeated in 2018 on the two paired plots highlighted in green in Table 2 (6.9: Crop rotation/control or change of species composition and 6.12: Change of grazing intensity level) with laboratory-based measurements added to the visual soil assessments. The aim was to investigate

As a result of this extended analysis, the example of crop rotation/control or change of species composition that was exemplified in Plot 6.9 (which combined organic farming, crop rotation and manuring) was finally selected to demonstrate the positive impact management practice can have on soil quality (see »Demonstration events in the study sites). 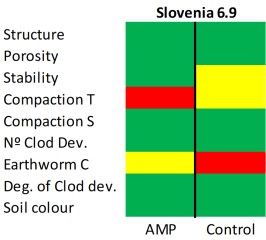 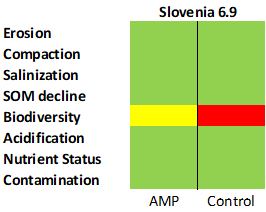 This practice addresses soil compaction, surface crust formation and organic matter depletion. The control plot consists of diverse crop rotation and conventional system with no organic matter amendment. VSA total scores are slightly higher for the soil under the AMP, where higher soil stability and earthworm counts were observed but in part counterbalanced by a higher topsoil compaction.

Of the 90 stakeholders who took part in the evaluation of the beta version of SQAPP, 23 were from the Ljubljansko polje study site. Participants were asked a series of questions relating to their expectations of SQAPP and the relevance of the soil parameters included in SQAPP, the assessment of soil threats and the suitability of the app's recommendations to their local context. The feedback and comments were combined with those from the other study sites and used in the further development of SQAPP. For details of the responses from all study sites see »Stakeholder feedback and SQAPP development. 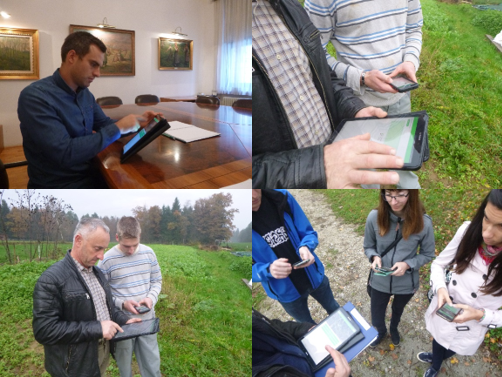 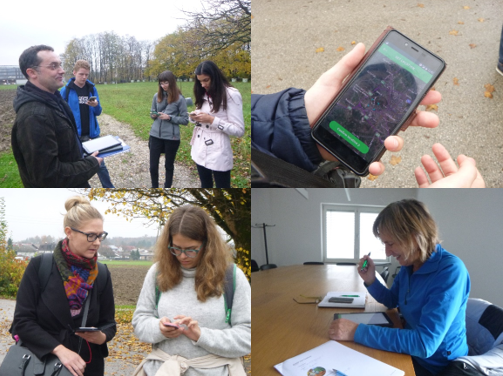 Two demonstration events were organised in the Ljubljansko polje study site to present the major findings of iSQAPER to stakeholders, demonstrate a management practice of proven benefit to soil quality and to evaluate the latest version of SQAPP. 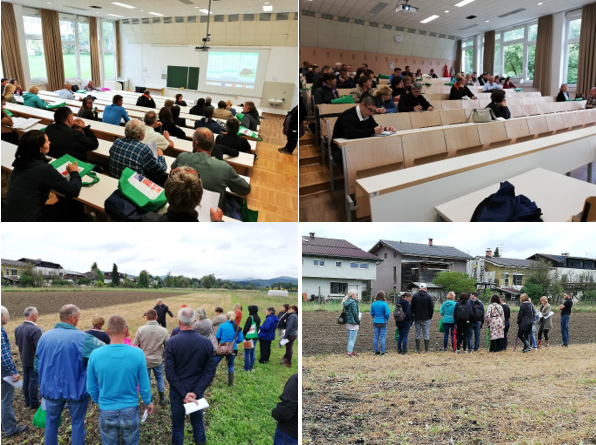 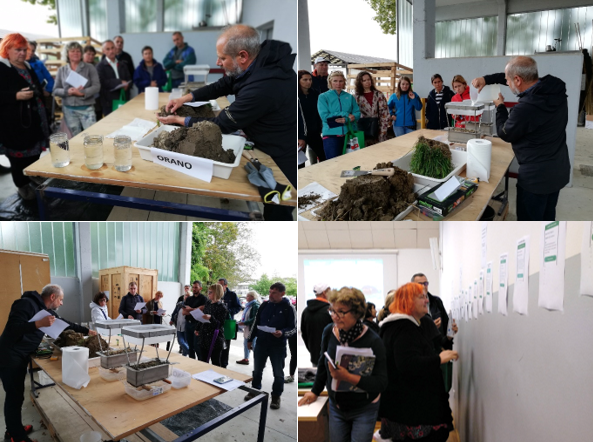 A leaflet describing the AMP combining organic farming, crop rotation and manuring was prepared to accompany the demonstrations. 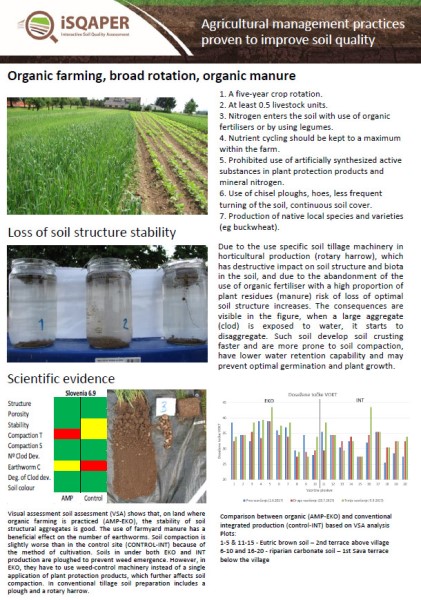 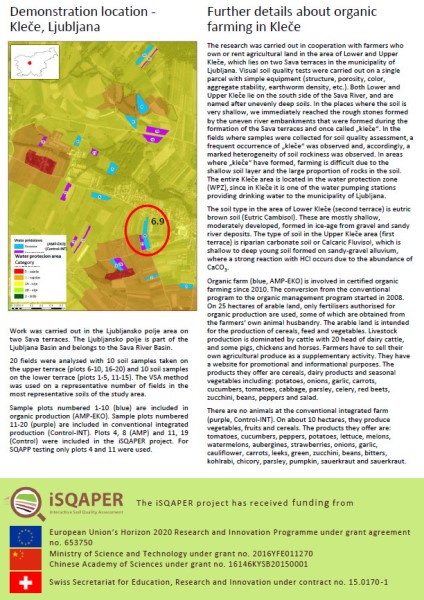 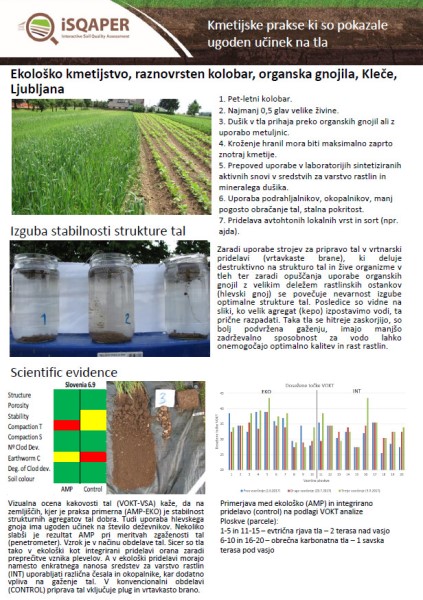 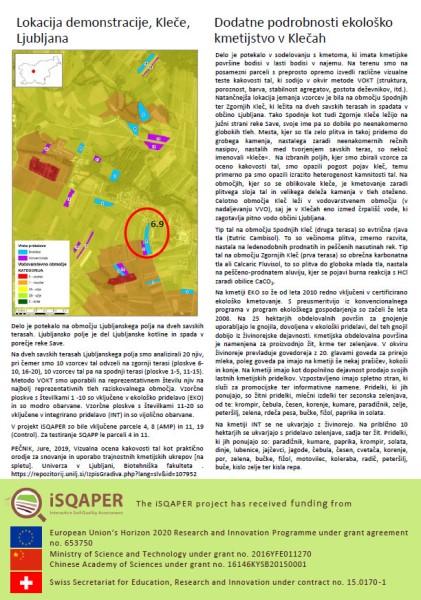 Members of the Ljubljansko polje study site team attended and contributed to the workshop in Madrid on developing scenarios of future farming. The results are presented in »Soil management scenarios.

Taking account discussions with the stakeholders and feedback from the various research tasks and events in which they took part, it is anticipated that the iSQAPER research programme could have a lasting legacy in the Ljubljana polje study site as indicated in Table 3.

Table 3: Activities in which iSQAPER's research programme could potentially have a lasting impact in the Ljubljansko polje study site