A series of short videos and infographics were made by the Tartumaa study site team to describe the soils and land use in the area and the way in which a number of locally used management practices benefit soil quality.

Estonia is situated north-east of Europe, more precisely located between 57°30′34″N to 59°49′12″N and from 21°45′ 49″E to 28°12′44″E. It is bounded on the north by the Gulf of Finland (an inlet of the Baltic Sea), on the east by Russia, on the south by Latvia, and on the west by the Baltic Sea. The mean air temperature in Estonia is +4.5–6.0°C, mean annual precipitation 600–700 mm and the vegetative period generally lasts for 170–185 days. The climate is Nemorial to Boreal. The amount of precipitation is more than two times higher than evapotranspiration. Snow cover is characterized by large spatial and temporal variations (75-135 days: from the beginning of January to the end of March). Estonian climatic conditions are favourable for mobilization of humus intensive biological weathering and turnover of substances in the plant-soil system. 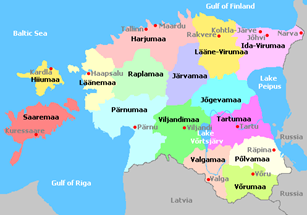 According to the FADN report (2018), on average 44% of the agricultural land was under forage crops, 38% was used to produce cereals, 8% was occupied by oilseed crops and 7% by other field crops, while 3% of the land use was left fallow. Most of the intensively managed farms are in Central Estonia (dairy and cereal) and alternative and organic farms can be found more on the west coast of Estonia and the islands. There are mainly mixed types of farms in the study area, where the main income comes from animal husbandry and crop production. However, dairy farming or farms that are specialized in crop production dominate, which can be both, organically or intensively managed. In big farms, grasslands are mainly fertilized with slurry and mineral fertilizers and not fertilized at all in some smaller farms. The cutting intensity is on average 3 cuts per season. Crop rotations are based mainly on cereals (spring- and winter wheat, barley, oat), oil rape and red clover timothy mixture. Soil tillage is a mixture of the conventional plough and reduced chisel-based, less no-tillage. Also, precision agriculture techniques are used in some farms.

The soils are highly variable and are impacted by their parent material, texture, water regime and types. There’s white pebble till mostly in Northern and Western Estonia, yellow-grey calcareous till in Central Estonia and red-brown till with variable calcareousness in Southern Estonia. The rock content of soils can be quite high. In Central and Southern Estonia where the study area is located, the main soil types are Luvisols with variable texture and calcareousness (Reintam et al., 2001). The share of Gleysols and Histosols is quite large among Estonian soils. Over 10% of agricultural land is on peat or peaty soils (Astover et al., 2019). Grasslands are located mainly on gleyic soils and Gleysols. The dominant soil texture is sandy loam.

There are 30 permanent agricultural soil survey points in Estonia, where the following measures are repeated at 5 yearly intervals:

Current applied research in agriculture (financed by Estonian Ministry of Agriculture) in Estonia include:

Since 2008, the soil compaction survey restarted in Estonia on 15 fields (repeated in 2013), where the typical parameters such as bulk density and texture, and the content of air filled pores at pF1.8 was measured.

The local stakeholders listed in Table 1 were involved throughout the duration of iSQAPER in a number of research tasks including: providing experimental sites for the soil quality assessment and agricultural management practice evaluation; testing and evaluating SQAPP; attending demonstration workshops; (and providing venues for and hosting the field visits for the iSQAPER plenary meeting).

The soil assessment campaign was repeated in 2018 on the two paired plots highlighted in green in Table 2 (10.12: Permanent soil cover / Removing less vegetation cover and 10.14: No-till; Crop rotation / Control or change of species composition) with laboratory-based measurements added to the visual soil assessments. The aim was to investigate

As a result of this extended analysis, the example of No-till/ Crop rotation / Control or change of species composition that was exemplified in Plot 10.14 (which combined no-till with a different crop rotation including permanent cover and legumes in the rotation) was finally selected to demonstrate the positive impact management practice can have on soil quality (see »Demonstration events in the study sites). 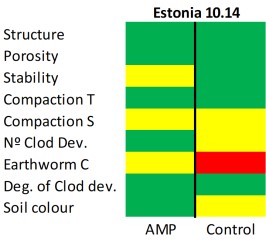 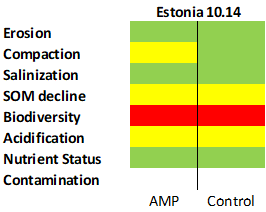 This practice addresses soil compaction. The VSA results show a lower soil stability under the AMP but a better earthworm count and soil colour (and probably a better mottle score). All other soil structure quality indicators were the same as the control (which was conventially tilled with a different crop rotation). Measured bulk density is a little higher under the AMP but that does not seem to be directly tied to a loss of soil structure quality. Other measured properties show minimal differences from the control.

The beta version of SQAPP was evaluated by stakeholders at 3 locations in Estonia. Participants were asked a series of questions relating to their expectations of SQAPP and the relevance of the soil parameters included in SQAPP, the assessment of soil threats and the suitability of the app's recommendations to their local context. The feedback and comments were combined with those from the other study sites and used in the further development of SQAPP. For details of the responses from all study sites see »Stakeholder feedback and SQAPP development. 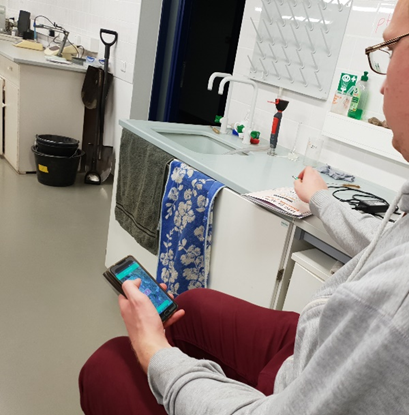 The soil quality app was tested in the class of Protection and Sustainable Use of Soils by masters students in 2019. A Master’s Thesis was written about the accuracy of SQAPP on Estonian production fields (Sutri 2020). The results showed that the accuracy of SQAPP was highest regarding soil pH and bulk density compared to other measured parameters. The app overestimated the content of soil organic carbon and total nitrogen on mineral soils and underestimated on Gleysols and Histosols. The results suggested that the accuracy was low particularly on Gleysols on Histosols.

On 13 September 2019 a demonstration event was organised in the village of Meeri in Tartu county to present the major findings of iSQAPER to stakeholders and to demonstrate no-tillage and direct seeding as a management practice of proven benefit to soil quality. Also, a practical demonstration of visual soil assessment was conducted. The event was attended by 72 participants. 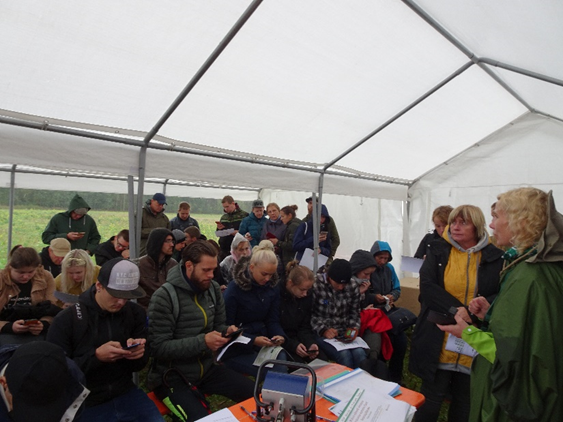 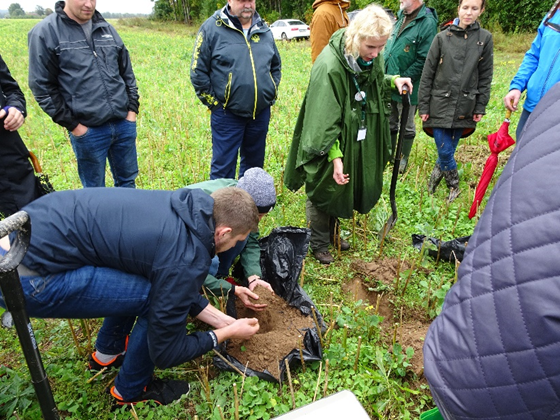 A leaflet describing no tillage and direct seeding was prepared to accompany the demonstrations. 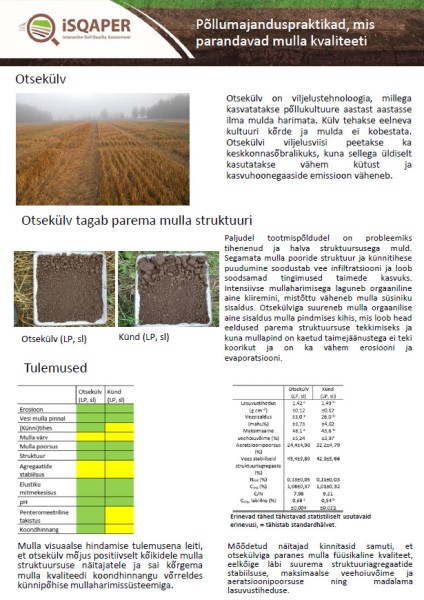 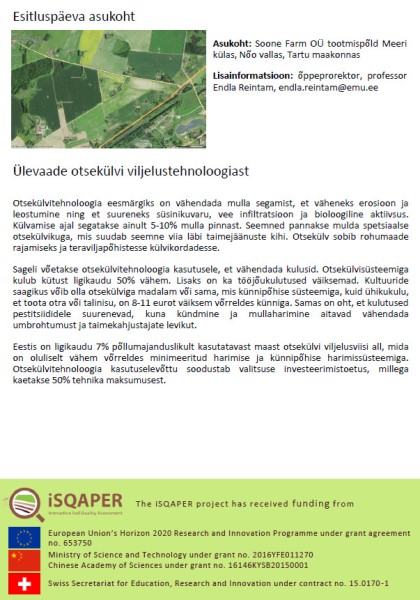 Taking account discussions with the stakeholders and feedback from the various research tasks and events in which they took part, it is anticipated that the iSQAPER research programme could have a lasting legacy in the Tartumaa study site as indicated in Table 3.

Table 3: Activities in which iSQAPER's research programme could potentially have a lasting impact in the Tartumaa study site