Zhifanggou Watershed is about 8.27 km2 and is located in the Ansai County, Yan’an City, Shaanxi Province (Figure 22). It is covered by loess soil, which is highly prone to erosion. It is in warm temperate monsoon zone with an annual mean temperature of 8.8 °C, annual accumulating temperature above 10 °C of 3170 °C, and a frost-free period of 160 days. The annual mean precipitation is about 541.2mm and about 70% of precipitation occurs in the May to October as several strong to intensive storms that induce severe soil erosion and surface runoff.

As a consequence of long-term soil erosion, the land surface in this region has become very fragmented. The land surface is composed of gullies and hills, with gully density of the watershed at 8.06 km per km2. Average annual erosion rate was 14000 t per km2 before 1983, and has decreased continuously to <4000 t per km2 after 2000.

There are three villages belonging to two administrative units in the watershed, namely Zhifanggou Village, Siyaoxian Village and Washuta Village. The population of the basin is 554 in 2010 with a population density of 67 per km2. 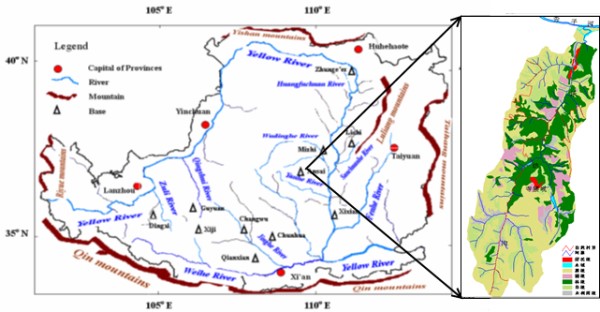 Land use and cover conditions in the Zhifanggou Watershed are typical of this region. Farmland per capita is 4.2 Chinese mu (1 ha =15 mu), in which the high quality farmland, such as alluvial land, terraces on the slopes and the dam-lands in the valleys after long-term sedimentation in the check-dams, is more than 2 mu per capita. The ratio of agriculture, forest and livestock field is 1:1.9:2.0. The traditional crops in this watershed are maize, millet, potato, beans, and the main permanent crop is apple. The average grain yield is about 200 kg per mu, and the net income is 2,500 CNY per capita in 2010.

The main soil is typical cultivated loess soils, a kind of loam soil derived from loess. The soils are fertile, but extremely susceptible to erosion. Sand, silt, and clay contents in soil profile are 65%, 24% and 11%, respectively (general properties of the loess material). The SOM is very low and ranges from 5.8 g to 13.4 g OM per kilogram of soil. Porosity of topsoil is 50% in volume and the infiltration rate of soil is fast. The main soil erosion is induced by surface flow during intensive rainfall events.

Soil moisture is monitored by various methods including sampling by soil-drills, TDR and neutron probe, at different frequency from 10 minutes to half-month each time in different eco-systems.

We use soil erosion plots with flow-muddy collection systems to monitor soil erosion rates from different treatments with slope, length, structure and planting system on the slopes (Figure above). Runoff and sediment load in the Zhifanggou Watershed is monitored with a V-shaped weir in the lower stream of valley.

The LUC change process, input and output of crop land including labour, fertilizers, yields and natural disasters are monitored as social and economic aspects of land management and soil quality improvement practices.

Based on WOCAT database (www.wocat.net), iSQAPER selected 18 promising agricultural management practices (AMPs) with potential to improve soil quality (»Agricultural management practices in the iSQAPER study sites). Six examples of a number of these AMPs were identified in the Zhifanggou Watershed study site that conformed to the following criteria: