The impact of promising agricultural management practices (AMPs) on soil quality was assessed using a Visual Soil Assessment (VSA) tool (e.g. Shepherd, 2000) in a total of 138 pairs of plots/farms spread across 14 study site areas, with10 located in Europe and 4 in China. The full description of the study site areas, the establishment of promising AMPs as well as the criteria used to select these 138 pair of farms/plots within each study site is provided in »Identification of experimental sites in which to measure impact of AMPs and Barão et al. (2019).

The 138 pair of farms/plots include a myriad of promising AMPs and combinations in use by farmers and represent the promising management choices undertaken locally. The majority of the evaluated pairs of plots/farms were on arable land with fewer pairs addressing management practices in pasture and permanent farming systems (Table 1).

2. Impact of AMPs on soil quality

The results (Table 2) show that of the 138 sets of paired plots,

Table 2. Summary of the impact of the implementation of the selected AMPs on soil quality in Europe and China.

In Europe, the AMPs that had a positive impact soil quality (Fig. 2A) were

For China, the AMPs had a positive impact on soil quality  (Fig. 2B) were 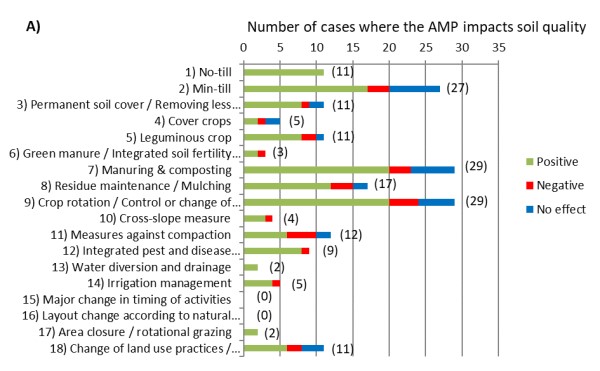 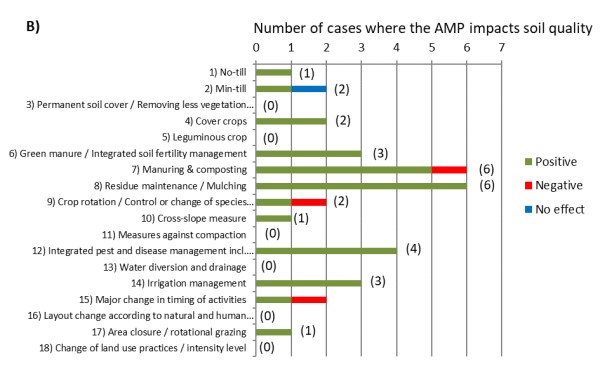 Table 3. Impacts of agricultural management practices (AMPs) on soil quality in the most investigated soil types

Within these common soils, AMPs with negative and no effect on soil quality are implemented mostly in Cambisols (37.5 %), Fluvisols (42 %) and Luvisols (29.4 %). The non-detectable effect of the promising practices on soil quality are due to type of tillage management, soil type and fertility that mask the effect of management practices on soil. Furthermore, the timing of the assessment may be an important parameter. VSA methodology should be performed in the middle of growing period of a certain crop or crop type. Certain soils, such as Fluvisols, are so fertile that only small differences in harvest time, tillage or crop type can cause changes in scores. Some types of management (min tillage) can explain the low number of earthworms present throughout soil profile due to the fact that organic matter is not ploughed deeper into the soil.

Results show that the most sensitive variables to soil quality are those describing soil structure, such as soil structure and consistency, soil porosity, aggregate stability reflected by the slaking test, and soil colour, followed by soil compaction indicated by the presence of a cultivation pan (Fig. 3). Taking into account some criteria regarding the assessment (e.g., friendly use, sensitivity to different soil types) and the feedback from the study site teams, the indicators selected for the evaluation of the impact of the AMPs on soil quality appear to be appropriate for soils of all study sites except for very fertile soils (Fig. 3). 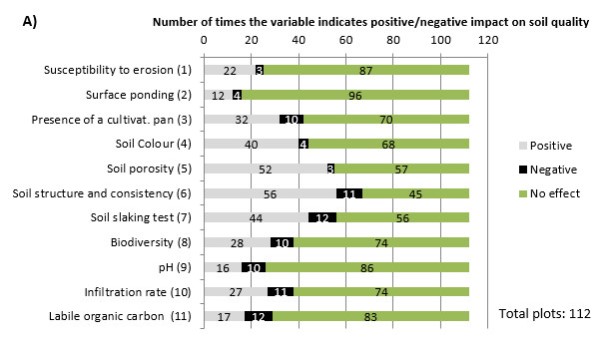 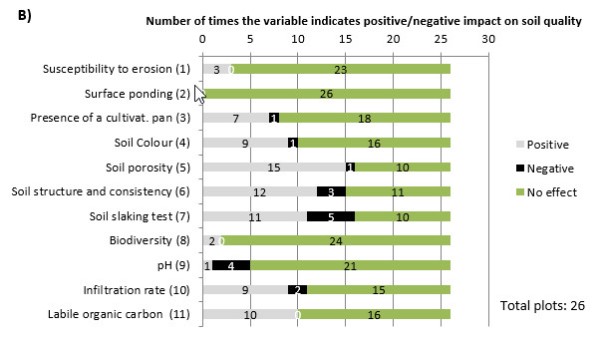 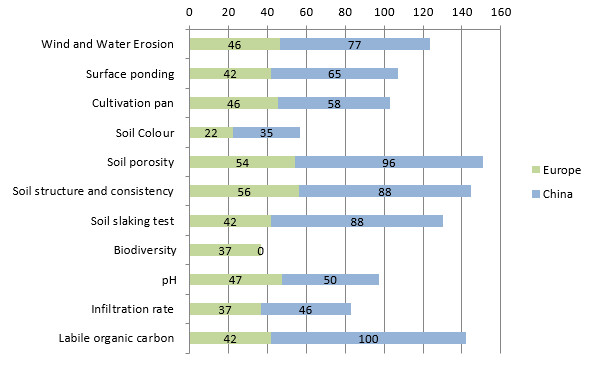 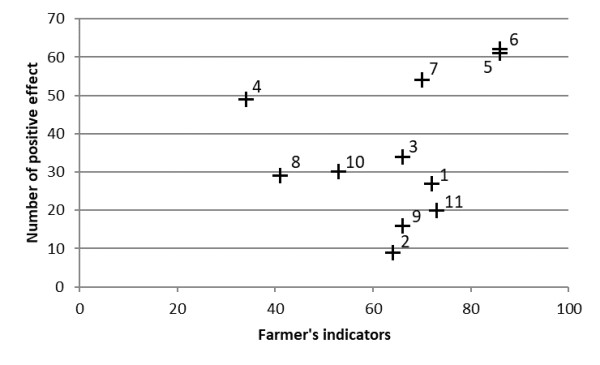 It is worth mentioning that the variables describing biodiversity (earthworm numbers) and the infiltration rate provide similar results in the study sites in Europe. This observation can be explained by the fact that biopores, representing only 0.23–2.00% of the total soil volume, may account for about 74–100% of the total water flux (Alaoui and Helbling, 2006). Their volume reduction due to compaction may significantly reduce vertical infiltration and thus increase surface runoff (e.g., Gerke, 2006; Hendrickx and Flury, 2001). Decreasing infiltration due to soil compaction is due to flow connectivity breaks between the top-few centimetres and the underlying macropores (Jégou et al., 2002). Similar results regarding the variables describing soil structure cannot be drawn for the case of China, probably because of the restricted number of investigated sites (26 in China against 112 in Europe) and a wider range of pedo-climatic zones in Europe than in China.

Using the standardized WOCAT framework for documentation and evaluation of Sustainable Land Management (SLM) technologies, between 1 and 5 Agricultural Management Practices (AMP) per study site were recorded (with some exceptions of Chinese study sites). The WOCAT framework enabled the study sites to describe the details of land management practices, to show the costs of implementation and maintenance, and to provide a comprehensive list of on- and off-site impacts. In general, one WOCAT technology usually includes a single AMP, but of the 31 technologies documented 4 included more than one AMP. For esample the technology “Annual green manure with Phacelia tanacetifolia in southern Spain” contains AMP Nr. 9 “Crop rotation / Control or change of species composition” and AMP Nr. 12 “Integrated pest and disease management incl. organic agriculture.

Most documented WOCAT technologies are related to the AMPs “No-till” (19%), “Manuring & composting” (17%), “Integrated pest and disease management including organic agriculture” and “Min-till” (14% each). Eight of the AMPs have not been recorded with WOCAT (see Figure 6). 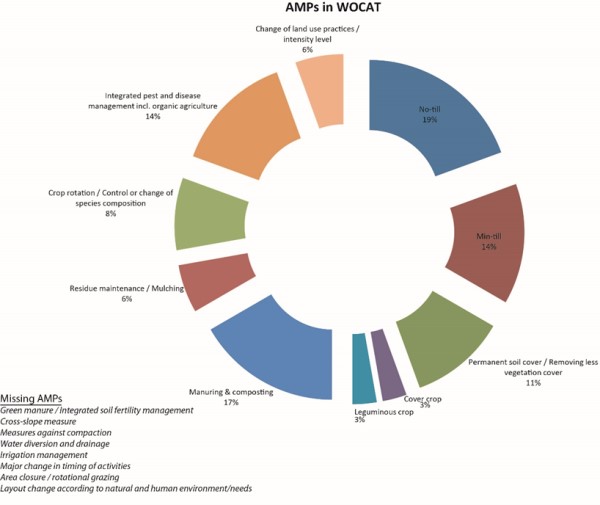 Looking at the implementation of the new AMPs reported with WOCAT (Figure 7), it can be seen that almost 60% of all technologies where introduced through the innovation of the land users while only roughly one quarter were introduced during the experiment. The main purpose of the reported technologies are to reduce, prevent, or restore land degradation (23%) followed by the motivation to improve production (18%), to create beneficial economic impact (17%) and to preserve or improve biodiversity (16%). Off-site oriented purposes such as reduce risk of disaster (2%) protect watershed and downstream areas (2%) were hardly mentioned. This is also reflected in Figure 8 where it can be seen that only a few off-site impacts of the AMPs were reported by the study site teams, compared to on-site impacts. 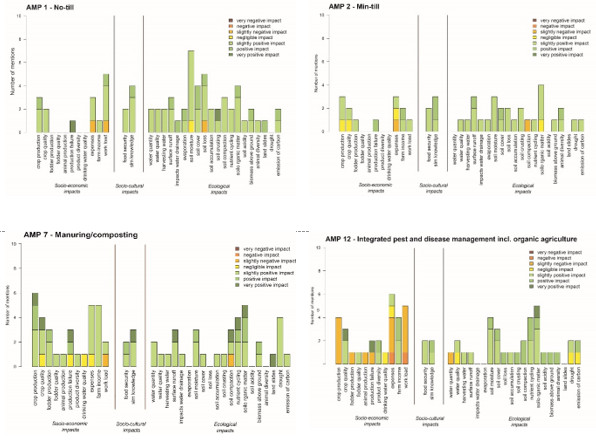 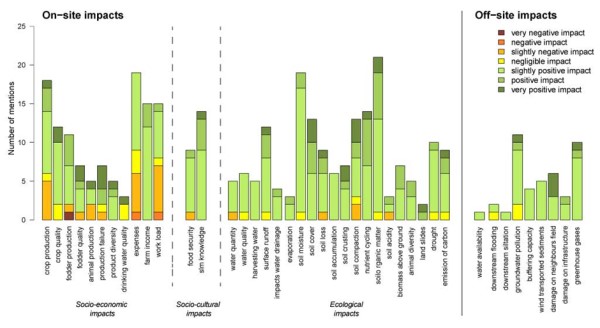 An on-site impact is the impact of a new implemented technology in the area or on the plot where the practice is applied. WOCAT differentiates between socio-economic, socio-cultural, and ecological impacts. Over all case studies, it appears clearly that socio-cultural impacts, such as “SLM knowledge” and “food security” have been increases through the implementation of new practices. In general the newly documented technologies also have positive ecological impacts with some exceptions in “soil loss”, “water quality” and “soil compaction”. Most negative impacts are observed or expected in “workload”, “expenses”, and “crop production”, which are all socio-economic impacts and mainly related to the AMP Nr. 12 (integrated pest and disease management incl. organic agriculture). The other most frequently documented AMPs, Nr 1 (no-till), Nr. 2 (min-till) and Nr. 7 (manuring / composting), have all mainly positive socio-economic, socio-cultural, and ecological impacts (see Figure 9).

On the other hand, impacts can also be off-site and affect adjacent areas further downstream with “groundwater pollution” or “damages on infrastructure and fields” (see Figure 8). However, the AMPs implemented recently have all negligible or positive off-site impacts. Especially through reducing “groundwater pollution” and “damages on infrastructure and fields” through reduced surface runoff and soil erosion.

In summary, the following outcomes can be reported.

4. Comments on results and further research

The non-detectable effect of the promising practices on soil quality can be attributed to the type of tillage management, soil type and fertility (Cambisols and Fluvisols) that mask the effect of management practices on soil. The time of year chosen for the assessment may have also played a part. Particularly for the fertile soils, it was difficult to distinguish between the plot with AMPs and the control and the timing of the assessment may be an important parameter influencing the scores of evaluation. Therefore, VSA methodology should be performed in the middle of growing period of a certain crop rotation and/or crop type and repeated several times per year.

In addition, soil threats were only partially covered with our indicators, for example nutrient decline was excluded. In this study, score of soil quality was done in a qualitative way. A quantitative approach is taken in »Impact of promising land managment practices. Additional evaluations based on laboratory and field measurements including physical, chemical, and biological aspects are were made in some sites to validate our findings. Plant indicators (e.g., size and development of the root system, crop yield, root diseases, weed infestation) were considered in the following seasons to check the quality of the information collected by soil indicators with the aim of providing sound data on soil quality and its improvement through promising management practices across Europe and China.