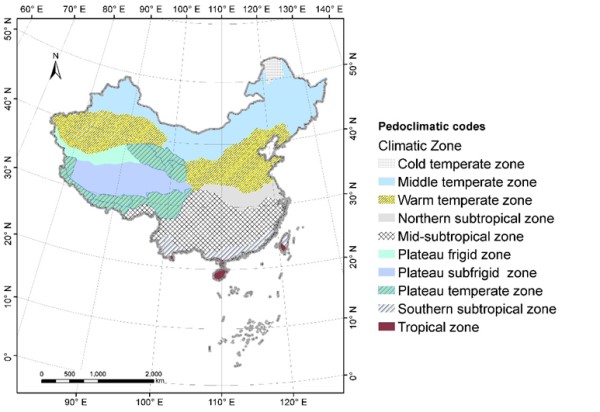 Pedoclimatic zones were delineated by overlapping the layer of European climatic zones geodatabase (Figure 1) – as reclassified for soil productivity evaluation by Tóth et al. (2013) based on the zonation of Hartwich et al. (2005) – with the layers of soil types (Reference Soil Groups, RSGs, WRB1998) of the European Soil Database (ESDB, EC 2003). Physical area for crops was calculated for each pedoclimatic zone using the MapSpam 2005 dataset developed by You et al. (2014).

Generally speaking, this partition in the climate zone map of China (Figure 2) is similar to the Chinese geomorphological zones. The update of current HWSD involves mainly the use of the new version of WRB soil classification system and supplementing existing polygons with new pedon data as available. The level of update is cross-border integration of national updates over the entire China. The maps and databases were merged by ISSCAS.

The cropping systems of the study

Similarities and differences of the distribution of crop types on different soils within climatic zones was assessed in a comparative manner using dissimilarity analysis.

We first assessed the dissimilarity between the cropping compositions of different pedoclimatic zones.

Dissimilarity was calculated with ‘vegan’ package (Oksanen et al., 2017). We computed Bray–Curtis dissimilarity index with vegan R package to quantify dissimilarity of RSGs based on the distribution of their cropping systems in pairwise comparisons. The dissimilarity index reaches its maximum value one when there are no shared cropping system classes between two compared RSGs. Analysis has been performed for each climatic zones separately. Function decostand was used to standardize the values.

Next, we assessed the differences of crop distribution in the climate zone by soil types and main crop types, by analysing the degree of association of crops to soil types.

Association was analysed with ‘vcd’ R package (Meyer at al., 2016). Association plot (Meyer et al., 2003): „reject the null hypothesis of independence of the two categorical variables when there are residuals which are too extreme, i.e., not close enough to zero. This is the well-known χ 2 test for independence in 2-way tables. When the χ 2 test statistic turns out to be significant for some data, it seems natural to go back to its components, i.e., the residuals, for a more detailed analysis. Association plots visualize the table of Pearson residuals (Zeileis et al., 2007, Meyer et al., 2006): each cell is represented by a rectangle that has (signed) height proportional to the corresponding Pearson residual and width proportional to the square root of the expected counts. The highlighted cells are those with residuals individually significant at approximately the 5% and 0.01% level. The main purpose of the shading is not to visualize significance but the pattern of deviation from independence.”

On the conditional association plot the horizontal size of the bars are (i) relative to the square root of the areas of soil types (PCZs) used for the observed crop within the CZ i.e. for comparison between soil types (same in each column) and (ii) relative to the square root area of the given crop type on the agricultural area of the CZ, i.e. for comparison between the crop types (same in each row).

Vertical extent of the bars show the deviation of the given crop's areal share on the observed soil from the average of those in the total agricultural land of the CZ.

Thus, the graph shows the reason for the difference too: crops occupying significantly higher or lower share within the given PCZ (soil type) than their average share within the climate zone turns higher up or deeper down from the zero line, respectively, depending on the level of significance of this difference. The height or depth of the bar, also highlighted by its colour indicates the level of significance in this difference.

We analysed with Chi-squared test (Everitt and Hothorn, 2010) if RSGs are significantly different regarding the distribution of the farming systems. Test has been performed on each RSG pairs.

Those soil types are considered, which occupy at least 1% of the area of the climate zone and of which at least 10% is cultivated.