The climate zone map of China (Figure 1) was provided by the China Meteorological Administration (CMA, 2011). Generally speaking, this partition is similar to the Chinese geomorphological zones (Figure 2). 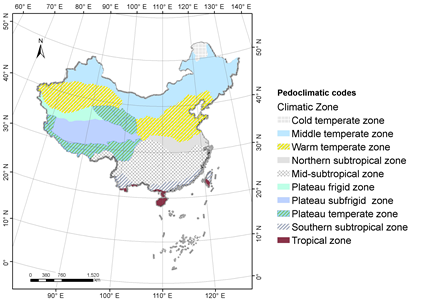 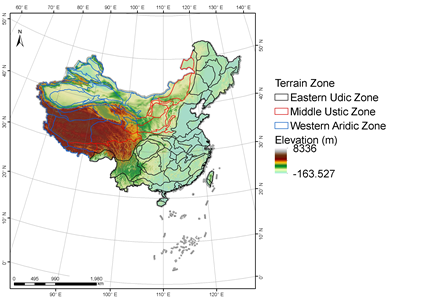 The warmest areas in winter are to be found in the South and Southwest, such as Sichuan, Banna in Yunnan, and Hainan Island. In summer the coolest spots are in the far northeast. China has a climate dominated by dry seasons and wet monsoons, which leads to clear temperature differences in winter and summer. In winter, northern winds coming from high latitude areas are cold and dry; in summer, southern winds from sea areas at lower latitude are warm and moist.

China's climates differ from region to region because of the country's extensive and complex topography. In the south of the Nanling Mountains, rains are prolific and the temperature is high all year round. In the Yangtze and Huaihe river valleys in the central part of China, there are four distinctive seasons. In northeast China, summer is short but there is much sunshine, while winter is long and cold. Precipitation is limited in northwest China where it is cold in winter and hot in summer. In southwest China of low latitudes, the land is elevated high, and has characteristically vertical seasonal zones. The main difference of climate zones regarding the orientation is as follows:

North: Northern winters, from December to March, can be extremely cold. Beijing may experience temperature of -20 °C at night, dry and no sun. During the summer, from May to August, temperatures in Beijing can hit 38 °C, coinciding with the rainy season for the city.

Central: The Yangtze River valley has long and humid summer with high temperatures from April to October. Winters there, with temperatures dropping well below freezing, can be as cold as in Beijing, particularly as there is no heating in public buildings to the south of the Yangtze River.

South: Near Guangzhou, the summer is a season of typhoons between July and September. Temperatures can rise to around 38 °C. Winters are short, between January and March. Precipitation averages 76 cm per year.

Northwest: It gets hot in summer, dry and sunny. The desert regions can be scorching in the daytime. Turphan, which sits in a depression 150 m below sea level, is referred to as the 'hottest place in China' with maximums of around 47 °C. In winter this region is as severely cold as the rest of northern China. Temperatures in Turphan during Winter are only slightly more favorable to human existence. This area of China climate experiences little rain, and as a consequence, the air is very dry. Summers, however, can exceed 40 °C, while winters may drop to -10 °C. Precipitation averages less than 10 cm per year.

Southwest (Tibet): Tibet is one of the harshest places for human existence. It is cool in summer but freezing cold in winter. In Lhasa, the mildest city in Tibet, temperature may exceed 29 °C in summer while plummeting to -16 °C in winter. Sun radiation is extremely strong in Tibet. The thin air can neither block off nor retain heat so that the temperature extremes can be met in daytime and the same night respectively in Tibet. The average temperature in north Tibet is subzero and winter arrives in October until the following May or June. May, June and September is the tourist season in east Tibet. In winter, roads are all blocked by heavy snow.

The update of current Harmonised World Soil Database involves mainly the use of the new version of World Reference Base soil classification system and supplementing existing polygons with new pedon data as available. The level of update is cross-border integration of national updates over the entire China.

3. Generation of the Chinese pedoclimatic zones

According to regional differentiation of soil type and climate type, the main soil types of each climatic zone were summarized. The main procedures can be found as follows: